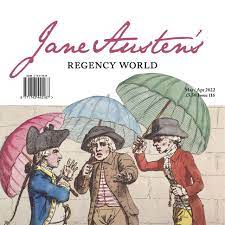 I was excited to open the March/April 2022 issue of Regency World magazine to find (on page 61) a book review by Joceline Bury of my third book. I am a longtime subscriber to this wonderful glossy magazine which arrives by mail from Bath, England. Here is what the book editor had to say about Austens of Broadford:

THE THIRD VOLUME of Carole Penfield’s trilogy, The Midwife Chronicles, is based on the life of Jane Austen’s great-grandmother, Elizabeth Austen (nee Weller). Eliza, as she was known, lived in the village of Horsmonden, near Tonbridge in Kent. She married John Austen in 1693 and gave birth to seven children, including Jane Austen’s grandfather, William. John died only 11 years after their marriage and Eliza was left with a large family, even larger debts and an interfering bully of a father-in-law (also named John).

From the recorded facts of Eliza’s life, Penfield has created a rich narrative charting her struggles and triumphs, building up a fascinating picture of village life at the turn of the 17th century (sic). Motherhood, the education of children, the challenges of housekeeping on a small budget–and the unrelenting battles with her wealthy, hostile father-in-law–are described in fascinating detail, providing a vivid picture of Eliza’s world.

The narrative is taken up by various characters, including Eliza herself, her shy but supremely observant little daughter Betty, and the would-be actor Bart, whose impressions of life among the gentry are those of an outsider looking in. Throughbout her married life, Eliza is supported by her friends and neighbours, Clare and Lucina Dupres, the fictional midwives of the trilogy’s title and Huguenot refugees from Louis XIV’s France. Clare’s dramatic and inspiring story is told in the first book of the trilogy, Midwife of Normandy and continued in Lucina’s Destiny and the two Frenchwomen plan an important part in Eliza’s family saga.

It is not giving anything away to mention that Eliza ended up having the last word on her “Father Austens’s” behaviour; she wrote a “memorandum” detailing her mistreatment at his hands and the document was passed down through the generations, ending up in her great-granddaughter’s hands. It seems likely that Jane took note of her ancestor’s words when she tackled the themes of money, class and inheritance in both Pride & Prejudice and Sense & Sensibility.

Many thanks to Ms. Bury for featuring all three of the books in the trilogy in her lovely review!

Posted in Blog
← On Being a Midwife in the 17th Century